Recently there has been much discussion and debate on Stage IIIB (4 interim) / 4 Final of the European Directive on the emission standards for non-road diesel engines. The implementation of Stage IIIB / 4 Final depends upon the net power of the engine, as shown in the Table below: 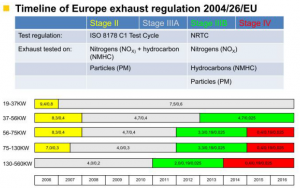 Federation of Piling Specialists May 2014