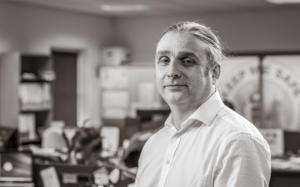 The session’s guest presenter was Jon Ball, Roger Bullivant, who has supported the FPS on its technical committee for several years acting as the liaison between the FPS and the Association of Geotechnical Specialists (AGS). He has also assisted as lead editor for several chapters of the current ICE specification for piling and embedded retaining walls.

Jon is also a Chartered Geologist and member of the European Federation of Geologists. He has been in the geotechnical industry for nearly thirty years and has spent most of his career with Roger Bullivant, where in his role as Chief Geotechnical Engineer, he has responsibility for geotechnical policy, design, quality management and new products. Jon has authored and co- authored over 12 papers on various aspects of piles and foundations, as well as acting as an industry supervisor for two post-doctorates and six masters degrees. He has contributed to the wider industry on a number of Codes and Standards committees, both UK and international, and is currently acting as both the UK representative to the tensile testing execution code and is UK lead piling expert to the group charged with the next iteration of Eurocode 7.

The session commenced with Jon explain how this was the first survey undertaken on this subject matter for 14 years and that moving forward it is hoped it will be repeated every 2-5 years to monitor the findings. The survey found that generally SI reports are ‘good’ for their purpose across all sections, but unfortunately the AGS data which has been available since 1992 isn’t reaching the end user, as only 2% of reports contained this digital data. It was explained how AGS data is important as it allows input of the ground conditions into models and would aid with moving the industry’s digital agenda forward.

The survey produced some common themes for information which isn’t always contained in reports which were discussed, namely; levels that the boreholes were taken from; ensuring borehole and window samples are undertaken in positions relevant to the development; Laboratory testing especially for rock soils and water monitoring data as useful when design retaining wall solutions.

The survey offers the FPS the opportunity to work closer with the BGA & AGS in specifying minimum standards for SI which aims to produce efficient ground engineering solutions, and the session talked about the need to present the findings of the survey and to get the message to all stakeholders the importance of useful SI work.

The group discussed forums such as:

After the presentation, Jon fielded some questions from the group and talked about how we all have a responsibility to ask for AGS data. Jon spoke also of how he encourages the use of ‘Dutch Cone’ testing when undertaking SI work as it’s a very detailed method of understanding the soil without disturbing the sample or introducing human judgement in determining the properties.

Members of the group also used the opportunity to echo the findings of the survey in that 90% of SI reports are issued without the AGS data and that it is common to receive SI which do not extend below the toe of the piles leaving engineering judgement being required.

Jon encouraged the ECG members to promote competent SI work as only with accurate data can we manage risk effectively and produce sustainable design solutions.

A copy of the presentation can be obtain from David Major DaMajor@laingorourke.com.