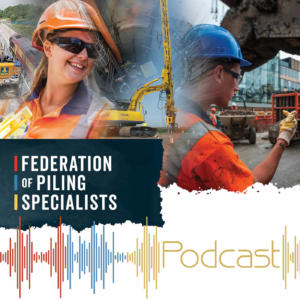 In latest episode of the Federation of Piling specialists (FPS) podcast, sponsored by Geofirma, FPS Chair Steve Hadley is joined by David Major, FPS Early Careers Group (ECG) Lead, who talks about the busy summer period for the Group and what’s coming up. Steve is also joined by experienced ground engineer Nirmal Tiwari, formerly Balfour Beatty Ground Engineering, who talks to Steve about some of the world famous projects he’s worked on during his many years in the industry and reveals that he’s got no intention of stopping work any time soon!

David, a returning guest, kicks off the recording with an overview of the ECG’s activities, which includes a talk from Keller about the many different types of grouting techniques, their application, and the various ground conditions they can be used in. David explains how the grouting presentation was very much in a CPD-style, with the ECG members looking to learn more at quite a technical level. David then follows with a brief discussion about Roger Bullivant’s presentation on the recent Ground Survey that was carried out, its findings and how this information will be used going forward. Topics for future planned events are also discussed, such as commercial good practices and a mini-open day, where ECG will see the many types of equipment used in ground engineering.

The purpose of the ECG is also touched upon, reminding people how the title may be a little misleading as it has a much broader remit, as well as the aim to grow FPS membership. Industry news items such as the London to Birmingham HS2 link are discussed, and the impact large-scale infrastructure project such as this will have on the piling and wider construction sector.

The curious link between the number of people entering the geosciences profession and the price of oil was discussed in relation to a recent AGS presentation, and how the sector can address the decline of people entering the industry. Suggested ideas and the initiatives such as the FPS mentoring scheme, in tackling the issue are discussed.

The GE Awards were also touched upon, and how events such as these allow the sector to showcase its achievements, and the benefits to companies and individuals. Entries that had caught both Steve and David’s eyes are spoken about, many with a sustainability theme.

Nirmal Tiwari begins his segment of the broadcast with the work he has undertaken historically on the “hollow pile” and Carbon Calculations – both initiatives that have now gained some serious traction, despite having their origins many years ago. Nirmal goes into detail about the hollow pile, from its concept through to its development, testing and uses, as well as difficulties that had to be overcome. His work on “SIESTA” a carbon footprint estimating tool, and how it was used is talked about, and the way clients viewed the project, as well as how the appetite for reducing carbon has grown considerably in recent years.

Conversation then moves on to Nirmal’s current work, as well as his career origins in India and how he discovered geotechnical engineering through his inspiration for Soil Mechanics etc… From small jobs in construction, he explains how he secured a place in a piling company and his subsequent career progression. From the many projects he worked on across in India, he speaks also about some of the many highlights and innovations he was involved with how solutions were arrived at. From building a diaphragm wall in the 1970s – and what that involved – through to some of the other notable and world-famous projects, such as his work on the Barbican and the Burj Al Arab, are explored.

Nirmal speaks highly of the UK’s best practice and how many countries he worked in could in the past have learned much from the UK’s approach, although he recognises that their capacity and willingness to learn has brought parity in recent years. He also talks about how people influenced him, but also the role he has often taken as a mentor too and the importance of giving something back to the sector.

What core values are embraced – hard work especially – is his concluding contribution and advice to all!

The podcast can be listened to here: https://tinyurl.com/y5llysaz