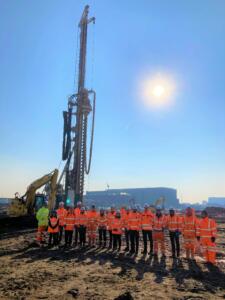 Held 8 March 2022, a total of 15 members attended, which included individuals from Expanded Piling, Roger Bullivant, Bachy Soletanche and Volker Ground Engineering, were shown around the active site as piling works commenced offering attendees the opportunity to observe the methods being used. In fact, the visit provided a thorough overview of the works from enabling works to the manufacture of the precast stands for the stadium.

The main contractor on site is Laing O’Rourke, with Expanded Piling conducting the piling works and the main build. Danial Jones, Gerald Knights (Expanded Piling) and Andy Baynton (Laing O’Rourke) were on-hand to talk about the scheme.

The enabling works involved sand, dredged from Liverpool Bay and the Irish Sea, into the dock via a pipeline from a trawler. It was explained that having the sand in a fluid state was crucial to the process however, the extracted sand quickly lost water during pumping. To rectify this issue extracted water from the Mersey was used to fluidise the sand within the hopper of the dredging vessel via a high-pressure water jet.

Following on from dredging and infilling of the dock, a rapid dynamic compaction process was undertaken, using a 94t excavator. The excavators’ hammer compacted each point at a rate of 40 blows per minute, to create 2m diameter craters 3m apart. Cone penetration testing (CPT) followed, the dynamic compaction to validate the process and ensure the required densities were achieved. When this wasn’t the case, the additional passes were conducted and then retested using CPT methods. CPT testing was also taken into the underlying silts, to ensure the process of infilling and compaction hasn’t caused any detrimental impacts to the silt.

With the compacted nature of the sand within the dock, a working platform was not required. However, a running layer of 6F5 was put down for the piling rigs and associated plant.

Piling work commenced October 2021 and is expected to continue until summer 2022. A total of 2,800no. CFA piles will be drilled across the site. CFA piles are being installed to either 14m to 19m deep, each being 600m in diameter and using between 4m3 and 7m3 of concrete. The use of air assistance has been used alongside the CFA techniques, which has dramatically improved the drilling times on the project (and thus production), whilst also helping to assist with penetration rates into the rock.

Following the CFA works, a secant piled wall is to be installed to provide a water-tight retaining wall, to allow the Western channel to be dredged and water re-introduced to provide the Western Channel in front of the Western Terrace.

The piling layout has been designed to avoid the dock walls and prevent damage to the listed assets, with a view that if Everton FC decides to relocate in the future, the site can be reverse engineered back into a dock.

Following the completion of piling in the relevant areas, all four main cores of the stadium are now out the ground, with the utilisation of Laing O’Rourke’s Centre of Excellence of Modern Construction (CEMC) providing pre-cast units, which are made in advance and lifted into place, providing a circa 30% programme benefit compared traditional RC methods.

The day was thoroughly enjoyed by all and was quite the learning experience regardless of role or experience.