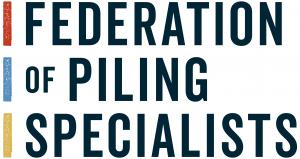 The Federation of Piling Specialists (FPS) has unveiled a striking new logo and accompanying branding, which are designed to reflect the vibrancy and dynamism of both the Federation and the piling sector it represents.

The new corporate identity was prompted by the Federation’s need to engage more fully with its growing audience of digitally savvy people, including the talented younger people coming out of schools and university.

Speaking about the new logo and branding Alasdair Henderson, Chair of the FPS said: “The existing logo has been in use for nearly 20 years and the Federation felt it was time to change. The new logo better reflects an industry that can offer a lot of variety and satisfaction and also job progression – essentially for people it can be an exciting career that progresses from site to Managing Director.”

The new logo has been designed to endure, taking extreme sports and outdoor activities like mountain biking as a visual cue for its visual presentation, and at the same time capturing the same energy and sense of excitement that is now the FPS.

With new media platforms, such as tablets and smart phones, increasingly the norm, the new logo has also been designed to be extremely flexible working across all these platforms.