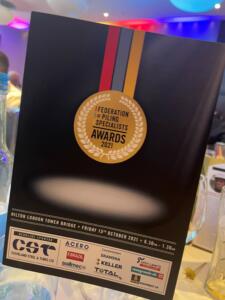 Hosted by well-known celebrity and mental health champion Ruby Wax OBE, alongside FPS Chair Steve Hadley, the Awards were a face-to-face opportunity to celebrate the outstanding achievements of individuals and companies of the FPS, and their contribution to the Ground Engineering industry.

Some 33 entries were submitted for this year’s Awards, and all were of the highest standard. In fact, the standard of entries were so good that the judges, Ebenezer Adenmosun (Managing Director, Geofirma), Julia Hill (Geotechnical Engineer, Roger Bullivant) and Alasdair Henderson (Global Director HR Business Partnering – Civil, Royal BAM Group), had a difficult task choosing a winner from the high-quality shortlist. However, after much deliberation, winners were chosen and were announced as:

The winner was Keller, for its Anti Kink Hose Spring, which the judges said was “a necessary innovation for the industry, especially considering hose blow outs are an ongoing issue with potentially fatal consequences. It is a great workforce-led solution and with evidence of it being used by other companies shows the innovation is clearly a success.”

Well-done to those shortlisted in this category; Bachy Soletanche for its 3.5 Tonne Cage Tamp and Expanded Piling for its Concrete Reducer.

The winner was Keller, for its Special Double Jet Grout, which the judges said “showed that significant development work was used to create this technology and that the innovation shows clear cost benefits, but also research benefits of grouting in specific ground conditions. On site field validation has been used to effectively prove the success of the application.”

Well-done to those shortlisted in this category; Cementation Skanska for its Digitised Site Forms and Roger Bullivant for its Underreamer.

The winner was Cementation Skanska, for its Zero-Trim Piles, which the judges said: “this innovation shows a great example of development to application despite the issues faced. It also showed a modest concrete volume reduction, but significant reduction in wasted effort for follow-on trades. The entry also showed very good examples of working towards a solution and that this innovation could be the future.”

Well-done to those shortlisted in this category; Roger Bullivant for their Underreamer and  Continuous Displacement Auger.

The winner was Lydia Widdicks, of Cementation Skanska, of whom the judges said: “has proven to be a very competent and intelligent individual, who has clearly demonstrated a very dynamic ability with the projects she has managed and contributed to. The responsibility given in her latest position show that her managers are fully trusting of her abilities to win work for the business. She has shown evidence of supporting colleagues though teamwork and encouraging new members onto the graduate program. She has taken the time to produce a paper on the Scottish project which proves a great enthusiasm for Ground Engineering and her ability to undertake so many roles within the business and being awarded several promotions proves her dedication to both the industry and the business.

Well-done also to those shortlisted in this category, Hollie Colville, BAM Ritchies and Luke Deamer, Keller.

The winner is David Major of Expanded, who was rewarded by the FPS for his contribution to the industry. Introducing him Steve said, “David had shown a completely unselfish approach to helping his peers across the industry. He not only devised the concept of the Early Career Group within the FPS but has ensured this is now an established group in which new talent entering our industry can develop and network with likeminded individuals. His commitment and energy for this group saw participation grow and interest increase from across the industry, including international attendance.

David’s ability to sell a concept and create an established group in just three years is testament to the energy and passion he has for bettering our industry and encouraging talent to join and grow within it. Though his time in the industry has been relatively short compared to others, he is already forming a lasting legacy and one which will be a platform for future leaders of our industry to grow from within.”

Whilst congratulations go to all those who entered, they were made possible only through the support of the sponsors, which were Headline Sponsor, Cleveland Steel and Tubes; Award Category Sponsors, Cementation Skanska, John Lawrie Tubular, Acero Construction and Bauer Equipment; Drinks Reception Sponsor, Acero Construction; After Party Sponsor, Total; Wine Sponsor, F Brazil; Associate Sponsors, Casagrande, Soilmec, and Keller.  For their generosity the FPS is extremely grateful.